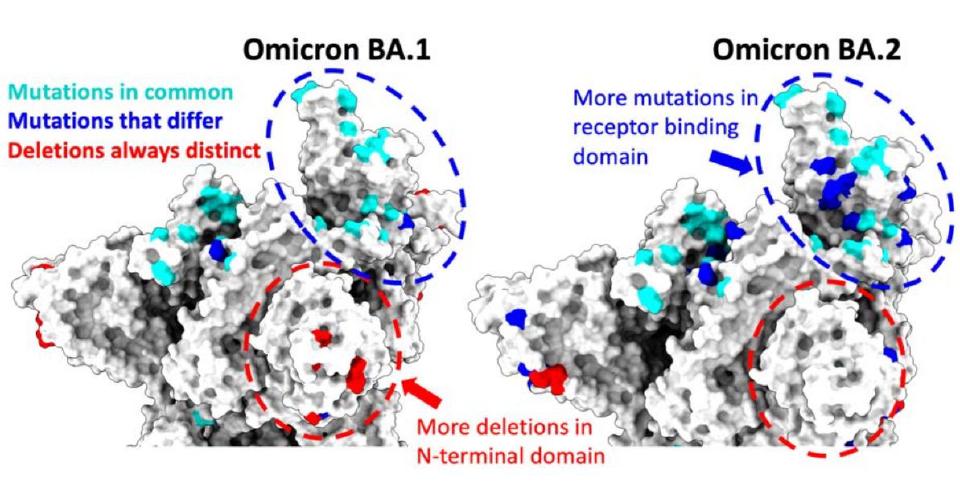 Illustration of the mutations in BA.1 and BA.2 on the crystal structure of the spike protein. The turquoise positions are common to both variants, dark blue represents point mutations that differ between BA.1 and BA.2. all insertions and deletions (red) are also different. BA.1 and BA.2 differ in significantly more positions than delta from the virus of origin. (Source: Omicron report, with many thanks for permission to use)
Copyright: Ulrich Elling, ÖAW, IMBA - Institute of Molecular Biotechnology

In addition to the currently predominant BA.1 variant, BA.2 (and later BA.3) was already classified as a sub-variant in early December. To date, little information is known about epidemiological differences in the parameters of BA.1 to BA.2. Regarding the infectivity of the BA.2 variant, there are speculations that it may be more contagious than BA.1 or may evade immune protection even better. The fact is that BA.2 has more than 20 mutation with about half at the spike protein and has an evolutionary advantage over BA.1 in some countries.

To date, no difference in hospitalization rates is thought to exist between the two strains. This is consistent with statements on initial analyses in Denmark and the UK. However, it is emphasized that the data are still too small to support this hypothesis.

In December, case incidence in Europe was determined by the Omikron BA.1 variant. Since the variant is now detected in many countries and is already dominant in Denmark, Sweden and India, and the proportion of it is also rapidly increasing in, for example, France, we assume that BA.2 will soon replace BA.1 in Austria as well.

Figure 2: Daily case numbers per 1 million people, as a 7-day average, in Denmark with dominant variant (Source: Our World in Data).

After the Delta wave in early December, the proportion of the Austrian population with upright protection against Delta was about 75%. Since BA.1 can already bypass immune protection to a degree according to international studies (especially the evaluations of Imperial College London), the proportion of persons protected against infection with BA.1 at the beginning of December was about 55% according to model calculations. Due to booster vaccinations as well as infections, this percentage is currently rising again.

If BA.2 is now able to bypass immune protection even better than BA.1, then the spread of this new variant has the same effect on the number of new infections as if the number of immunized persons were reduced. This hypothesis is supported by observations from other European countries, most notably Denmark. There, the vaccination coverage rate is better than in most countries (ca.80% fully vaccinated, ca.60% boosted), nevertheless, after a short flattening of the Omikron BA.1 wave, the infection dynamics accelerated again with the adoption of BA.2.

Since BA.2 was sequenced as early as November 17, 2021, and thus only one week after BA.1 (November 12, 2021). If the evolutionary advantage of BA.2 is purely conditioned on higher infectivity, the question arises from a modeling point of view why it is only now gaining ground against BA.1. If BA.1 only has a “starting advantage” of a few weeks, a much higher infectivity with otherwise identical model assumptions would lead to BA.2 having a much steeper rise and thus having to replace BA.1 earlier. More plausible from a model perspective is if part of the evolutionary advantage is due to better immune evasion. In this case, the higher the proportion of recovered and vaccinated, the greater the evolutionary advantage, which in the model initially entails only a small but, as the pandemic progresses, a higher growth advantage over BA.1 and can better explain the time lag of the dynamics as well as the replacement in the model for the currently observed data of other countries.

From the model point of view, this could cause the current Omikron wave to “widen” somewhat or, if the serotype shift to BA.2 is delayed, a second peak could occur after a short decline in new infections. Under these assumptions, the BA.2 wave will then increasingly affect persons who have either been vaccinated or have already recovered and therefore have a higher protection against severe courses. Under these conditions, a good immunization status is desirable, because a further decrease in the hospitalization rate can be expected.