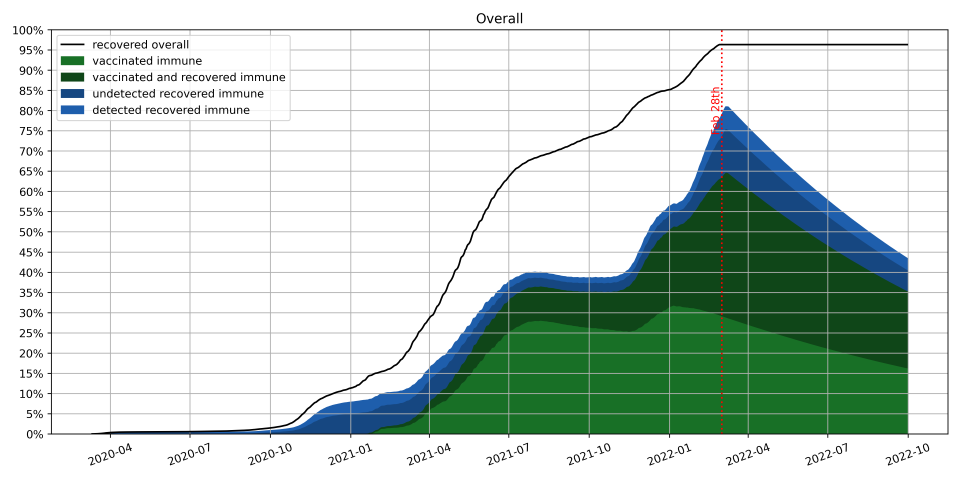 Based on the successful (and recently published) population immunization level analysis model, an extension was developed (in collaboration with TU Wien and DEXHELPP). This extension allows to map on the one hand the immunization process and on the other hand the loss of protection against infection, as well as the loss of protection against hospitalization. Thus, it is possible to extrapolate the immunization level of the population into the future, which in turn supports decision makers.

Due to the current uncertainties regarding the data situation and epidemiological situation (see PDF of the study for details), the model was simplified/adapted accordingly. The model results are therefore not future predictions, but serve to better understand the dynamics of the immunization level. It can be estimated how the level of immunization - without external influences - will develop, which in turn makes it possible to make appropriate preparations.

In order to take into account the uncertainties from the input and parameterization data, both an optimistic scenario (slower decline of the protective effect) and a pessimistic one were investigated in the current study. The starting point for both scenarios is the current level (Feb. 28, 2022) of immunization (by vaccination or recovery). This is (including the dark figure) currently between 60% and 65% (against disease). This value should be interpreted with great caution, since it describes epidemiologically the proportion of people who are theoretically 100% protected. In reality, however, a larger proportion of people are only partially protected. This value is therefore not directly comparable with apparently similar values from clinical studies.

Based on this (see Figure 1), even in the optimistic scenario, the immunization level drops to one-fifth of the current value (approx.12%) by October 1. This means that by October 1, about 4.3 million immune Austrians will be missing the current level, which is currently sufficient to reach the peak of the Omicron wave.

However, it should also be emphasized that the level of protection against hospitalization is far more persistent (according to current knowledge). This level drops from just over 80% currently to only about 30-45% (see title graph). This is arguably true in a zero scenario, where neither immunization by recovery nor vaccination occurs as of today.

Figure 1: Immunity of the Austrian population against infection with the Omicron variant in the optimistic scenario. The horizontal lines indicate at which immunity level the respective wave (has) peaked. The plotted line for BA.2 is estimated using epidemic models.

The title graph shows the immunity of the Austrian population against hospitalization with the Omicron variant in the optimistic scenario.