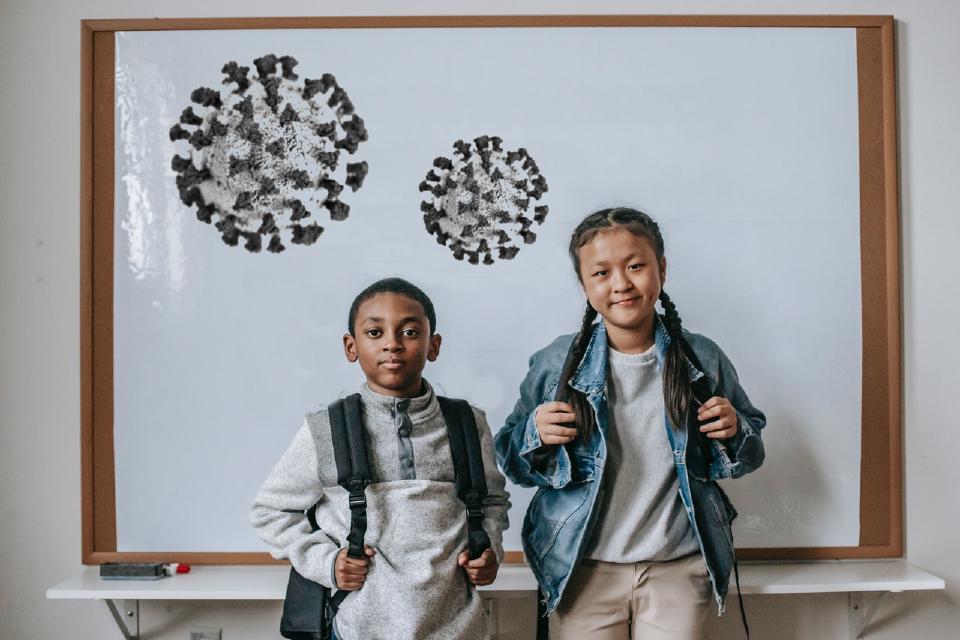 In a recent analysis, the reduction or amplification of spread dynamics in schools was modeled based on different measures. This involved varying the parameters of infectivity in schools to determine how sensitive the dynamics in the school and in the overall population are to this variation. This is made possible by agent-based network modeling, in which schools and the contacts that occur there can be modeled in detail.

While it is not possible to model individual measures in detail, by changing the overall infectivity, a good estimate can be made of how “sensitive” the system is to the gradual relaxation of measures.

The forecast scenario and calibration was done with 8/6/2021 and is based on the calibration for the forecast consortium. This means we assume the current, very positive trend in the scenarios. As assumptions for school screening, 50% of students are tested daily and antigen tests are predominantly used (based on sensitivity, the model results in a detection rate of 0.2). In some (test) schools, “gargle tests” are used. The reduction of the infectivity probability by hygiene and mandatory masking is 50% lower in the basic scenario compared to no measures. Infectivity is then varied between 40% and 80% in the scenarios, i.e., a reduction in the probability of infection between 20% and 60%, as of June 10. Weaker seasonality in July compared to the previous year (2020) was assumed for the calculated scenarios. In this respect, the absolute numbers do not represent a concrete forecast, but hopefully overestimate the dynamics. The reason for this assumption is to better see and classify the negative effect of lower measures.

Figure 1: New confirmed cases from June 8, 2021 to the end of July 2021 in the total population. Note that conservative assumptions were made for summer, regarding contacts and seasonality. The slight increase results from this and does not represent a quantitative forecast to be used without the project context. There is a noticeable reduction in confirmed cases in early July due to the elimination of school screenings.

Figure 2: Confirmed cases cumulatively from June 8, 2021 to the end of July 2021 by age group. Especially in the generation that often have no direct contacts and are widely vaccinated, no increases in the incidences are seen.

In the model results, it can be seen that the difference between the different assumptions on the probability of infection or infectivity in the schools is small. This can be interpreted to mean that some reduction in measures does not have a strong impact.

When measures are reduced, individual clusters can be expected to occur. However, this cannot be prevented with certainty even in the current mode. And even in the scenarios with higher progression, hygiene measures are still included.

In comparison with scenarios of the last months, the model shows that in any case a continuation of the screenings is of great importance and their effect exceeds the steps calculated here or their reduction.

Important: Imported variants with potential escape mutations were not considered. While these would not likely have an impact in the short term, their occurrence would necessitate a critical analysis of further development.

The corresponding short report with further information can be downloaded here as PDF.