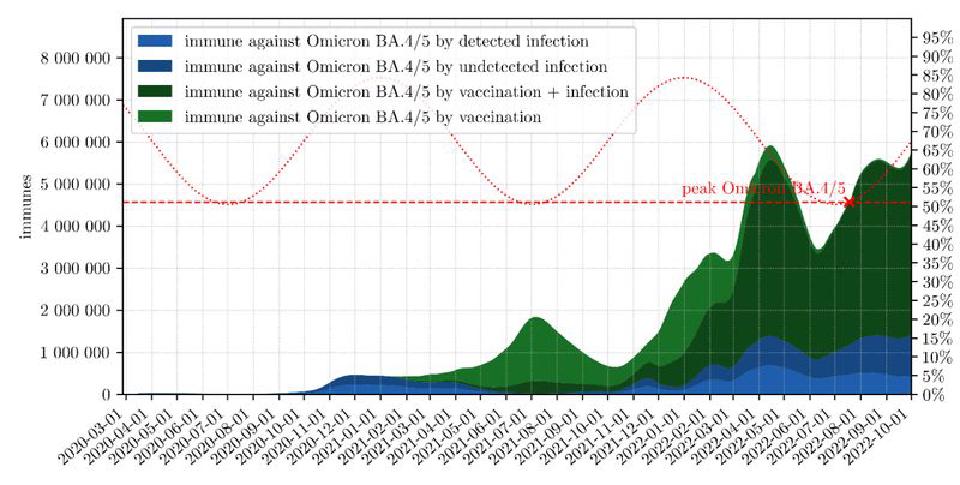 Due to current data & status of population immunization: updates are finalized with findings report

Since March 1, 2021, a total of 18 updates on immunity level estimates have been calculated in monthly increments and published on http://www.dexhelpp.at/en/immunization_level/. During this time, the calculation has been continuously developed and adapted to the latest circumstances. Due to the combination of reduced quantity and quality of data and increasing complexity of influencing factors, the validation of an immunity level estimate for Austria is currently no longer quantitatively meaningful. Therefore, we conclude the public update with a report of accumulated experience (German only). The limitations of such models also need to be presented transparently. Qualitatively, we will continue the analysis to understand the context for other model uses. We will further analyze their limitations.

Comparison of the three calibration methods from the report. The graphs show the resulting immunity level when calibrating via infection in the agent-based model (top), with publish cohort studies (middle) and using reinfections in the EMS (bottom).

The population-level immunity level was introduced in early 2021 as a defined quantity that elegantly circumvents the problems of the notion of immunity at the individual level while serving to assess the current inherent pressure of infectious disease as it directly affects the effective reproductive number. It is a data- and model-based estimate of effective immunization against infection and disease for the population as a whole and should not be confused with individual immunization, nor should it be confused with purely data-based estimates of total number of vaccinations or infections measured.

This value was as significant then as it is now, albeit for a different reason: in 2021, it was relevant for ranking vaccination coverage; today, it acquires relevance via the question of temporary immunization in light of systemic influencing factors such as seasonality and immune escape variants but also strategic measures such as masks. Then, from January 2022, it became clear that there is not only one value to be considered, but that the immunity level is always dependent on the variant.

To model the dynamics of an epidemic - and thus also to classify the ongoing immunity level - figures on the situation of symptomatic but also asymptomatic infections are necessary. Until summer 2022, the data quality of these figures was better in Austria than in international comparison due to intensive testing. Since April 2022, the quality of SARS-CoV-2 or Covid-19 surveillance has been declining due to decreasing willingness to test as well as a reduction of resources spent, especially regarding the level of detail of information on the spread of the virus.

Noninvasive systems such as effluent monitoring can be complementary to direct surveillance through testing, but they do not map dimensions such as age or immunization status, for example. These changes increase the challenge for pandemic situation analysis. The proportion of undetected recovered increasingly “biased” the officially immunologically naïve reference cohort. With the absence of this direct validation strategy, concepts had to be created on how to maintain plausible estimates.

In addition to the available data, the second challenge is that the systemic state, i.e., the interaction of (cross-)immunity, immunity decline, seasonality, and virus prevalence, has changed considerably over the past year and a half and must now be considered in a much more nuanced way than, say, at the beginning of the pandemic. At that time, the population was fully susceptible (i.e., infectious) and there was one variant of SARS-CoV-2 (at least it was not further differentiated). This year, the currently dominant variants Omikron BA.4 and 5 are already variants four and five after Delta, BA.1 and BA.2, and with BA.2.75.2, BA.2.9 and BJ.1 there are three more candidates for a successor this fall. Thus, after two and a half years, with 5 million confirmed SARS-CoV-2 cases and 19 million vaccinations administered, there is a highly complex and dynamic immunity status in the population.

The model-based estimation of the immunity level is thus completed and a detailed summary of the collected experience and findings is available downloadable as PDF here (German only). Qualitative analyses and modeling, as well as sensitivity analyses on the spread of variants and the resulting immunization, will continue to be performed and published in case of new insights.