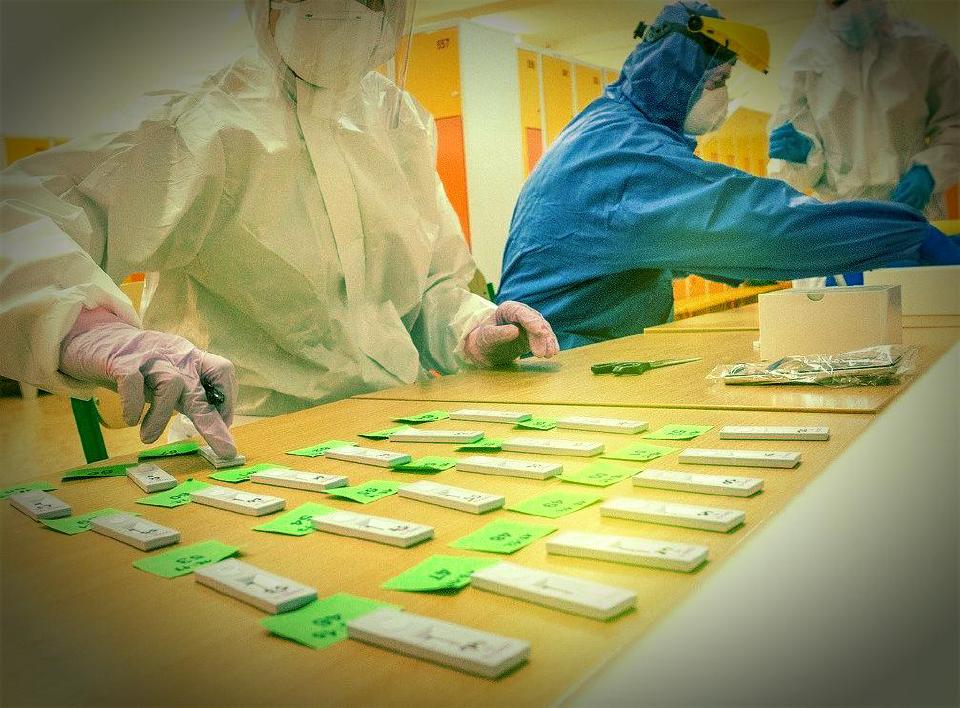 If we basically look at what happens in “mass testing”, we can try to roughly estimate the benefit depending on the participation. We assume in a simplified way that the tests happen at a defined time. As model scenarios we vary the number of people tested, 200 000 (2.5% of the population) to 6.3 million (70% of the population). We set the date of 05.12.2020.

The test sensitivity is assumed to be 70%, which is an estimate for conventional antigen rapid tests (see e.g. J. Dinnes et al., “Rapid, point-of-care antigen and molecular-based tests for diagnosis of SARS-CoV-2 infection”, Cochrane Database Syst. Rev., Aug. 2020, doi: 10.1002/14651858.CD013705.). False-positive tests were not considered in the simulation study because they have no/chewable effect on the epidemic (but of course an important aspect in principle).

If we look at the model results of the agent-based model with regard to newly reported cases, as they would be expected without weekday-related fluctuations in the Epidemiological Notification System (EMS), we see the following graph

Figure 1: Model results for mass test scenarios with partial opening of the lockdown on 7.12. for different numbers of tests.

With the model you can also see how strong the effect of a contact tracing would be. This looks as follows:

Figure 2: Model results for mass test scenarios with partial opening of the lockdown on 7.12. for different numbers of tests.

What can we see?

Considering all model simplifications, the following effects can be seen quite well: Clearly, the epidemiological effectiveness of the test depends on the participation rate - the more, the more effective. If up to 10% participate, the effect is very low, at just under 3 million it is clearly visible, and above 6 million the effect is already clearly visible. And: in this model, the test has no effect on the epidemic trend. If the numbers increase before the test, they continue to increase afterwards at a similar rate, but at a lower level. To achieve such effects, an even larger proportion would probably have to be found. The results of the newly found cases (peak heights in Figure 1) suggest that the number of infected persons found positive could be about 1% of the tests performed.

As a basis the current parameterization level of the dwh COVID-19 model is used for forecasts within the COVID-19 forecast consortium. The set epidemiological and demographic parameters can be taken from the current model documentation (or M. R. Bicher, C. Rippinger, C. Urach, D. Brunmeir, U. Siebert, and N. Popper, “Agent-Based Simulation for Evaluation of Contact-Tracing Policies Against the Spread of SARS-CoV-2”, Epidemiology, preprint, May 2020. doi: 10.1101/2020.05.12.20098970.), the parameters for the effectiveness of the currently implemented measures are calibrated to the current number of cases on 24.11.2020. The calibration algorithm can also be found in the documentation.

The cross-sectional test is implemented as a point event in the model, which detects and isolates undetected, i.e. asymptomatic and pre-symptomatic, infected model agents depending on the test sensitivity. According to the model assumption, 80% of all infected persons belong to this dark figure cohort. In reality, this test will not be a point event but a process. However, if this process does not last longer than 7-10 days, the model simplification made is permissible with regard to the target variables, since the total number of infected persons does not vary greatly within this period.

As with the modelled TTI system for “normal operation”, the isolation time of newly found positive cases is 10 days. In addition, persons at risk in the vicinity of the newly found infected persons are also isolated for 10 days (household quarantine as well as weak contact tracing with 25% found contact partners).s